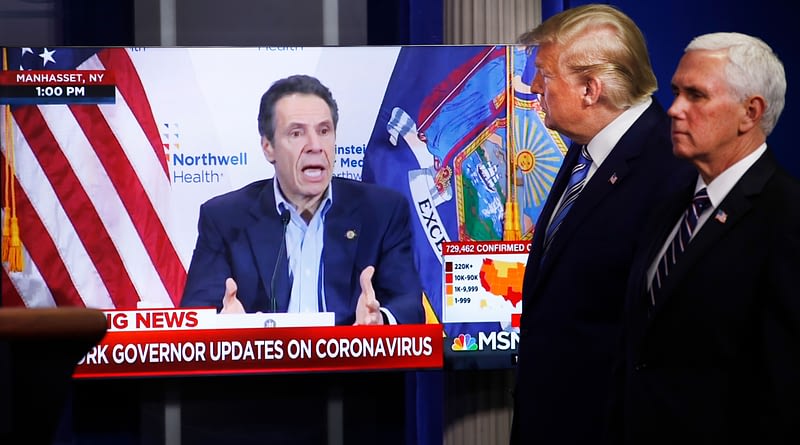 WASHINGTON – President Donald Trump said that increased federal funding to help states recover from the coronavirus pandemic is unfair to Republicans, “because all the states that need help — they’re run by Democrats in every case.”

“You look at Illinois, you look at New York, look at California, you know, those three, there’s tremendous debt there, and many others,” Trump said in an interview with the New York Post published Monday.

“I don’t think the Republicans want to be in a position where they bail out states that are, that have been mismanaged over a long period of time,” the president said.

On Tuesday, Trump went a step further, and suggested that any federal coronavirus aid to states should be conditioned on those cities and states adopting policies that more closely mirror Trump’s political priorities.

“Well run States should not be bailing out poorly run States, using CoronaVirus as the excuse! The elimination of Sanctuary Cities, Payroll Taxes, and perhaps Capital Gains Taxes, must be put on the table. Also lawsuit indemnification & business deductions for restaurants & ent.” Trump tweeted Tuesday afternoon.

The effect of the tweet is to inject the president’s priorities into a negotiation that is largely the realm of Congress, which appropriates federal funding. Trump would be required to sign any new bills into law, however.

The White House declined to comment on whether these policy goals were ultimatums, or merely an opening salvo in the negotiations. It’s also difficult to separate Trump’s demands from his political priorities in an election year. Tax cuts and immigration are two issues in particular that have animated the president’s supporters in the past.

The question of whether and how to allocate federal funds to states is emerging as a key fault line for Congress as it prepares to negotiate a fourth coronavirus aid package in the coming weeks.

Democratic House leadership insists that any legislation contain $500 billion in aid for states. But Senate Majority Leader Mitch McConnell, R-Ky., recently dismissed the idea of allowing states to use federal funds to help them make up for budget shortfalls.

Unlike the federal government, states cannot borrow money to fund ongoing operations. So the tax revenue that has been lost due to the coronavirus will require cuts elsewhere in the states’ budgets in order for them to remain balanced.

Both Democratic and Republican governors have pointed out that these revenue shortfalls are likely to mean cuts to social services for the poor and elderly and funding for police, fire departments and schools.

“That’s complete nonsense,” said Maryland GOP Gov. Larry Hogan, in response to McConnell’s characterization of the funds as, essentially, a blue state bailout. “These are well-run states. There are just as many Republicans as Democrats that strongly support this,” Hogan, who chairs the National Governors Association, told Politico.

Trump has drawn a distinction between what he calls “a bailout” and merely reimbursing states for coronavirus expenses, but it’s a fuzzy line.

“I think Congress is inclined to do a lot of things, but I don’t think they’re inclined to do bailouts,” Trump told the New York Post. “A bailout is different than, you know, reimbursing for the plague.”

This is not the first time Trump has cast federal aid to states in nakedly political terms. Last week, he tweeted, “Why should the people and taxpayers of America be bailing out poorly run states (like Illinois, as example) and cities, in all cases Democrat run and managed, when most of the other states are not looking for bailout help? I am open to discussing anything, but just asking?”

“What we’re asking, every state is asking, because of the coronavirus, we need financial help in restarting the economy, and that’s what we’re asking for from the federal government,” said Cuomo, also a Democrat.

Cuomo also noted that some of the same states Trump was accusing of fiscal mismanagement in reality contribute more annually to federal coffers, in the form of tax revenue, than any other states. He then posted listing the top five donor states to the federal Treasury: New York, New Jersey, Massachusetts, Connecticut and California, respectively.

In Washington, congressional aid for states has long been a deeply controversial and complex issue. It often pits the House, where representation is determined by population, against the Senate, where every state has an equal number of senators, no matter how many or how few people live there.

Early rounds of federal funding to states, specifically earmarked for coronavirus response, have already been impacted by this push and pull.

According to an analysis by The Associated Press, four states in particular have received an outsized amount of federal coronavirus funding in relation to how many positive Covid-19 tests they actually had: Hawaii, Montana, Wyoming and Alaska.

“Their haul ranged from $2 million per positive test in Hawaii to nearly $3.4 million per test in Alaska. In Wyoming, the smallest state with less than 600 positive cases, the $1.25 billion it received from the congressional package equates to 80% of its annual general state budget,” wrote the AP’s Geoff Mulvihill.

Montana and Hawaii currently have Democratic governors, while the governors of Wyoming and Alaska are both Republicans.

The Senate returned to Washington this week after more than a month away, and already there are signs that the debate over state funding won’t break along traditional party lines.

Spotted leaving the Republican senators’ weekly lunch on Tuesday was Mitt Romney of Utah, carrying a giant poster with a graph on it. “Blue states aren’t the only ones getting screwed,” it read.